What’s With the Falling Trees?

In the silence of night, in the tranquility of the darkness, a tree fell in our front yard approximately sixty feet from our house; and we did not hear a sound. 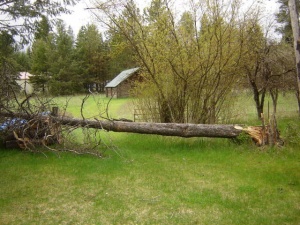 Trunk broke at the bottom. 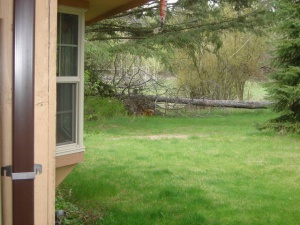 Half top of tree laying on the ground green but bottom half branches dead. Will have to check out other trees also.

God Spares Us Once More

I don’t know what it is about trees falling and me, but this is the third tree that’s fallen in my yard. One was 22 years ago, then another one fell, mid November 2013.

It’s a frightening thing to think that something so huge and destructive can happen so close to the house. Thankfully, it only caused some damage to the pasture gate.

The tree that fell months ago was nothing short of miraculous. The tree fell towards our house, minutes after my husband was outside, in its path, because we heard a loud snap sound. Not finding anything, we went back inside and got back in bed. Within minutes, the giant crash got us out of bed, but because God’s finger of love and grace is much more powerful than a stubborn tree, the tree was stopped by the only tree in its way.  A few more inches to the right or left and it would have landed on our house. Read more and See pictures here.

Then there was the miraculous time my daughter Rachel* was playing with her bunny in the front yard. The bunny ran under our minivan in the driveway. A huge gust of wind hit and suddenly before Rachel’s eyes, there was a tree on my car. But Rachel was spared without one hair harmed. Read post and see pictures here.

Isn’t it just like God to watch over his children? Sure, I speak as one who has been involved in countless auto accidents (not my fault by the way), rear ended too many times to count, and once T-boned by an off-duty police officer who ran a red light. Yes, you did read that one right.

The T-bone impact was so forceful, it spun my car to face north, when I was traveling south. That day, I was not spared the huge burrito-sized bruise on the bottom of my eight-plus-month-swollen belly, nor was my not-quite-two-year-old, my three year old, or I spared the whiplashes. This was in the early 1980s when the use of car seats was limited, and there were no toddler booster seats, so only my two year old was in a car seat.

Thankfully my unborn son was spared any kind of head injury, his head was in the same place the steering wheel hit my belly, and my other babies and I were spared any further injury.

I am so grateful for His powerful hand.

Then, 27 years later, my son was called into Heaven by God, on September 24th, 2011, via a motorcycle accident. It was his appointed time. To this day, I am ever so grateful that God took him almost immediately, and there was no further suffering.

Though we don’t always understand or like God’s schedule, He is God, and has the freedom to exercise His will over ours. But as Scripture says God indeed does love us.

“For God so loved the world that He gave His only begotten Son, that whosoever believes in Him should not perish but have everlasting life.” John 3:16

“For I am persuaded that neither death nor life, nor angels nor principalities, nor powers, nor things present, nor things to come, nor height, nor depth, nor any other created things, shall be able to separate us from the love of God, which is in Christ Jesus our Lord.” Romans 8:38-39

See what great love the Father has lavished on us, that we should be called children of God!  1 John 3:1

God truly does love us.

But he has appointed a day for each of us to end our life on earth.

Seek the LORD while He may be found; call on Him while He is near. Isaiah 55:6

God again set a certain day, calling it “Today.” This He did when a long time later He spoke through David, as in the passage already quoted: “Today, if you hear His voice, do not harden your hearts.” Hebrews 4:7

Do not boast about tomorrow, for you do not know what a day may bring.  Proverbs 27:1

Filed under Awed by His Love and Grace, Following Christ Has Changed My Life, Loss of a Child, The Miraculous