20 Things You Might Not Know About Me Blog Tag Challenge

Booklovers1 tagged me to a blog challenge 20 Things You Might Know About Me Blog Tag .  I thought I would try it and pass the tag on to several bloggers.  Blog challenges can be a fun way to get to know each other. I enjoyed getting to know some personal things about Booklovers1. She has a great blog in which she reviews books, music, even a few movies and more.  She is the super sweet lady who reviewed my book Black Coat with a Silver Lining a while back.

Here are the Tag Challenge questions and my answers:

Question 1: How tall are you?  I am definitely taller than most women.  This greatly bothered me when I was much younger as I wanted to look feminine and petite, but it sure comes in handy when I need to grab something off the top shelf!
Question 2: Do you have a hidden talent? If so, what?   Well, if it’s hidden I wouldn’t know. LOL.  I do tend to enjoy all sorts of arts and crafts.  I gave my walls a Mediterranean texture with drywall mud, and put up Italian tile in my kitchen and they turned out pretty well. I have done many other things I never really tried until I did them.  I guess the best way to find out if you have a hidden talent is to try something new!
Question 3: What’s your biggest blog-related pet peeve?  That I don’t have enough time to go on more of the blogs I would love to read.  As for a pet peeve about my own blogging experiences, it’s when I have combed through my post several times, hit publish, then later find some obvious errors. END_OF_DOCUMENT_TOKEN_TO_BE_REPLACED

Filed under Just for Fun

There’s so much I wish someone had been there to tell you when you were a small child, and in your teens. Since no one seemed to care much what went on in your life then, I decided to write to you to tell you what I would have told you at eighteen years of age. I hope you don’t mind the intrusion.

First of all, you aren’t worthless and you aren’t a failure. No. You. Are. Not. 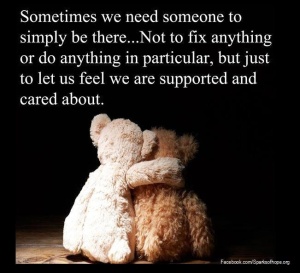 His love shows up in our lives through the kind word or gentle touch of a friend.

Chorus
No one ever cared for me like Jesus;
There’s no other friend so kind as He.
No one else could take the sin and darkness from me;
O how much He cared for me. END_OF_DOCUMENT_TOKEN_TO_BE_REPLACED

Filed under God and Jesus, Hope

The University of Higher Learning

Off and on I have shared with you a few of the hardships I have experienced the last 3 years.

The death of my son. Then immediately after his death I needed more emotional support than ever, but instead was further alienated and impacted by terrible family drama, followed by the estrangement of a precious family member. Shortly after that I experienced an ankle injury that took 8 months to fully heal. I thought I was out of the woods once my ankle healed, but no. Sitting around waiting for my ankle to heal led to my back atrophying and further caused issues with a previously existing back injury, which then led to over six months of sciatica (also referred to as psychotica because of its ability to drive a reasonable person to utter insanity).

After some time I could commiserate with Job’s predicament.

Throughout the hard times I asked, begged, and sometimes in frustration demanded healing and relief. I cried buckets of tears. I wanted, needed, an escape from the agony and the heartache. I wanted a speedy recovery, a prompt delivery, anything, to get me past the immediate pain. END_OF_DOCUMENT_TOKEN_TO_BE_REPLACED

Filed under Awed by His Love and Grace, Following Christ Has Changed My Life, God and Jesus, Hope, Inner Sruggles and Heartache, Life Lessons