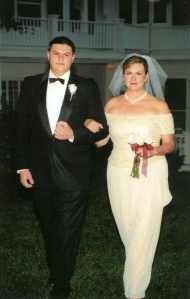 I never prayed so hard for a sunny day. I always dreamed of having an outdoor wedding. We chose an upscale turn-of-the-century, Victorian bed and breakfast overlooking a beautiful lake for our wedding and reception.
It had been pouring for days, but God answered my prayer. September 25th 2004 turned out to be a gorgeous day after all.
Shortly after I announced I would be getting married for the second time, my then 20 year old son, Jonathan, actually asked me if he could walk me down the aisle on my wedding day. His question caught me off-guard because Jonathan made it clear he did not like to attend any wedding. I hadn’t planned on anyone walking me down the aisle at all, but after thinking about it for a second or two, I felt flattered that my son would request such a thing. How could I possibly say no to that!
As the wedding march played, we made the slow progression down the long, grassy aisle from the B&B to the place my husband-to-be was waiting. Though the day was sunny and dry, the grass was soggy and drenched from days of rain. My three inch heels sank into the ground. With each step I took, I had to pause a little extra, then work to pull my heel out of the mushy grass. After a few steps, Jonathan whispered to me.
“Mom, you know, you don’t have to get married if you don’t want to.”
“I know I don’t have to, Jonathan,” I said, wondering why he was saying such a thing when I was already nervous.
“I just want you to know you don’t have to go through with this wedding if you don’t feel right about it.”
“What are you talking about?” I whispered as we continued our march down the aisle.
“You keep hesitating with each step, like you aren’t sure,” he said.
I so desperately wanted to laugh-out-loud at my son’s concern over my “wedding trepidations,” but controlled myself and whispered back. “My heels are sinking in the wet grass, and it’s hard to pull them out. Thanks Jonathan, but I am fine.”
I believe the photographer took the pictures while we were having this awkward conversation and that is why he looks so somber and why I have such a strange look on my face.
Little did I know then, that almost to the day, seven years later, Jonathan would be taken to Heaven after a motorcycle accident, September 24th, 2011.
I am grateful that I have this photo as a reminder of a very sweet and tender moment with my son.
It only seems right that to add to the commemoration of this special memory of my son, this happens to be my 100th post!
Thank you all who have stuck around and read my posts! I am honored and humbled by your visits.
By ~ Elizabeth Yalian 2013 ©http://hiseyeisonthissparrow.com.

Filed under Awed by His Love and Grace, Everydayliving, Gottalaugh, Just for Fun, Life Lessons, Loss of a Child, Seeds of Inspirations, Writing and Author Stuff