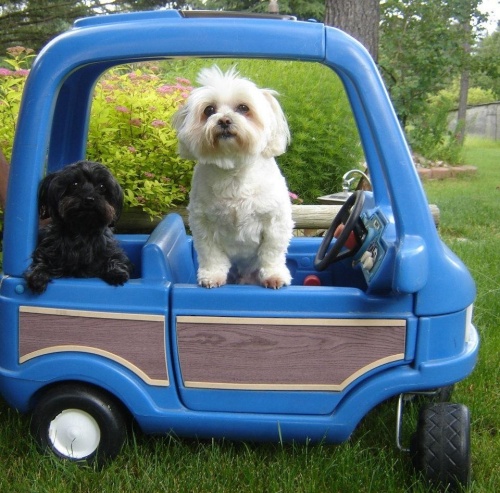 Oliver (white) and his sister Sofi

Oliver has been one of the best dogs I have ever had.  I knew immediately he was the right one when I saw him.

If only finding a human life companion was that uncomplicated.

It was a terrible time of my life then, and I was desperate for a buddy. I knew a puppy would help chase the blues away.  I drove—one hour, one way— for the puppy I wanted at a semi-affordable price.  I wanted a girl puppy, and planned on naming her Olivia.

When I got to the pet shop, there was a litter of five white, adorable, eight week old Peekapoos.

The only girl was too yappy.  She yapped in her high-pitch bark anytime anyone got near the kennel, and would not shut up until they walked away.

The store owner sang her praises, but I feared if I brought a yapper home, my husband would throw her out the window when I wasn’t looking.

Well…maybe not literally throw her out, but I was certain she would cause dispute between us.

Trying to ignore the non-stop-high-pitch-yapping was very hard to do while I watched the other pups.

One slept blissfully through the racket.  One walked all over poop in the corner of the kennel, and frantically scratched at the walls.  One just sat with a look of stupor on his face.  One sat peacefully, intently watching my face with his soulful eyes.

That’s the one I wanted.

The man was disappointed I decided on a boy, mainly because the female fetched a higher price.

“But I held her for you,” he said as if that would change my mind.

Give me a break, I thought, I just talked to you two hours ago. It wasn’t like the pet shop was crawling with customers.

Oliver will be nine years old this month.  I have never regretted bringing him home.  He has been an excellent companion, and a source of great laughter.  Like the time, as a teen-pup, he swallowed a small ball of twine, which ended up being wrapped around his intestines, and partially came out his rear end.  Well, that definitely was not funny then, but that’s another story.

So you can understand why today when I was horrified over Oliver’s unwelcomed surprise, not only could I not be too upset with a sick dog but as I cleaned up the foul mess, I felt an awful lot of love for him.

It all began around 4:30 in the morning.  I took the dogs out as usual to do their business.  Oliver sleeps in my bedroom, but for some reason lately when I let the dogs out in the morning, he has chosen to stay in the living room when he comes back in.

I heard him scratching at my bedroom door at about 6 and figured he just wanted in. When he scratches at the door, Sofi will bark; nothing anyone wants to hear at 6 a.m.

When I woke up, I found a collection of tootsie-rolls, if you know what I mean, near the bedroom door.  Thankfully, we have laminate flooring in our downstairs living areas.  I was quite surprised, Oliver has had an almost-spotless record when it comes to accidents.  (Pun intended)

“What’s up with this stuff, Oliver?” I said looking at him.

Oliver’s eyes sadly met mine with a look of humbled-guilt.

But then, there was also a looser collection by the front door.

I cleaned up the mess grateful that it was not worse.

A little later, I went upstairs and found a blob on the off-white, Berber carpeted stairs.

Oliver was a bit clingy during all this.  Normally, if I am cleaning such a mess he disappears, even when he’s innocent.

Me being the germ-phobic that I am, it takes paper towels, baby wipes, spot remover, and a vinegar mixture to clean this kind of mess.

I decided to inspect every square foot of carpet upstairs just in case, Oliver followed me around.  I was relieved everything looked great.

As we were headed back down, Oliver had another accident right in front of me, just before the stairs.  This time a two-x-three inch spot, the consistency of chocolate pudding.  (My apologies if you have been mentally traumatized at the thought of ‘tootsie rolls or chocolate pudding’)

“Oh no, Oliver!” I yelled out.  This startled Oliver. He scampered down the stairs leaving a trail of ‘unfinished business’ on three steps, and even splattered the wall.  I followed him downstairs, careful where I stepped, and watched Oliver leave a trail of the substance as he ran. The tell-tale odor of a sick stomach filled the whole house.

As I cleaned the nasty mess, I was reminded of how God often cleans up our stinky messes.

He says our righteousness is as filthy rags. (which actually refers to used menstrual cloths) Yet, God has still provided a way to keep us from being estranged from Him,  and a way to cover the stench of those sinful rags in our hearts.

He loves us so much that He came to earth in human form (by the name of Jesus) to tell us of His love, to offer His forgiveness, and to pay the ransom for our cleanup.

When we try to hide our sin from God, the stenchy mess spreads further, and gets more difficult to clean.

God faithfully sticks with us, and helps us get on our feet when we are willing to come to Him. He loves us more than we could ever fathom.  Nothing can compare  to God’s true love, patience, and forgiveness for us!

Please Lord, help us not to lose sight of Your everlasting love.

Filed under Animals and Pets, Awed by His Love and Grace, Following Christ Has Changed My Life, Hope, Humor, Seeds of Inspirations