In the Potter’s Hand 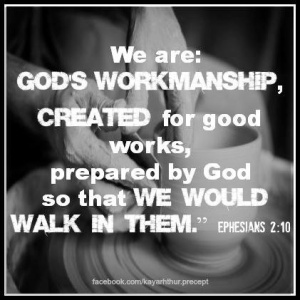 That you have made so many poor choices that you are beyond hope?

That nothing can make you worthy in the eyes of God?

I have those moments too.

In the verses above God makes a point, using the potter Jeremiah watches, the pot is not conforming under the potter’s hands. What makes the pot flawed we don’t know but we are told that the potter had to re-form the pot into “another pot shaping it as seemed best to him.”

Though we are never told the flaw, we can guess from God’s next words:

What is He talking about? We know from the paragraphs that follow that the nation of Israel has once again stepped out of line with God. God sends the prophet to warn them: shape up before He Himself has to take very drastic measures.

Like a loving parent, God warns Israel. He gives them a chance, and often many chances. Why, because He continues to love them no matter how marred they are, and strives for them to become whole.

God loves His children and the bearers of His name no matter how flawed we are.

It is imperative to remember that while we are on earth, we remain on the potter’s wheel, and in His hands. The safest place to be.

Initially, it does not appear very safe at all. The clay’s smacked, squeezed, kneaded, patted, pushed and pulled, REPEATEDLY, until it is shaped and nurtured into the finished product. And boy do we feel it! All that “action” keeps the clay the right consistency, and any air bubbles that will later weaken the finished piece are worked out.

There are three things that specifically caught my attention as I watched several potter YouTubes.

When the potter is content with the masterpiece he has so invested himself into; he must fire it in a kiln. This is the most delicate part of all because different temperatures cause different effects on the piece being fired. The potter’s choice of heat temperature must be just right or the piece can crack or burst.

My post would seem endless if I went into the process of kiln firing. But from what I understand after the clay is air dryed, the initial firing starts at 100 degrees F, and the clay goes through stages from that initial kiln stage, each time the heat temperature higher, to drying, to dehydration, to burn off, to quartz inversion, to lastly, vitrification; which happens at about 1800 degrees F.

As you can see, there is much work, perseverance, and sacrifice in each masterpiece.

So, next time you think you have blown is so badly that God wouldn’t want to waste His time on you consider the message God asked Jeremiah to relay to the Israelites, and consider the verse below.

“ …being confident of this, that He who began a good work in you will carry it on to completion until the day of Christ Jesus.” Philippians 1:6

If you have surrendered your heart to the Lord, He is indeed doing a good work in you. In our day and age of disposable and replaceable items it’s easy for us to imagine God looking down at our marred lump of clay with a disgusted face, and throwing us into the discard pile; but that’s not reality with God. To Him we are precious. Jesus’ blood has covered our flaws. When He tweaks us here and pushes us there He does it to mold us into the image of Jesus. Because of Jesus, we become perfect in the eyes of our Lord.

Sometimes I wonder why on earth my life has been so utterly difficult from day one. My conclusion: other than the fact we live in a shattered world, infected with problems and poor choices caused by sin that affect each of us, I will also remember that The Potter is at work in my life perfecting a His good work.

The potter is re-forming the marred pot into “another pot shaping it as seemed best to Him.”

In between the kneading, the pushing, the pulling, the squeezing, and the countless ouches; we must stay faithful and remember to say, thank You Lord for loving us so much that You willingly work out the kinks, even when we scream and kick through the process.

“To be a servant of God, you must be moldable and remain in the hand of the master.”  Henry T. Blackaby

Filed under Awed by His Love and Grace, Following Christ Has Changed My Life, God and Jesus, Hope

2 responses to “In the Potter’s Hand”