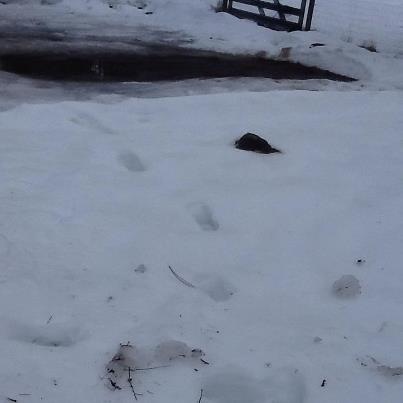 Sometime in early February, I took the dogs out at 6 am to go potty. I felt uneasy when I saw shoe prints in the fresh fallen snow. These tracks were all over the front yard. They came towards the house from one side of the yard, went around our bay window, continued around the porch and on to the other side of the house, then out to the driveway. We live out in the country, so animal tracks are a common thing, but these looked like actual human footprints. Convinced a prowler had been staking out our place and tried to peek in the window, I put the little dogs in the house and woke up hubby. He grabbed a flashlight since it was still dark outside, and went to check things out. He silently followed the tracks in the snow with the light of the flashlight while I watched from the porch. After a bit he walked out into the driveway which had very little snow. “These are moose tracks,” he said.

“Now way! How can they be! I know what moose tracks look like, these are human tracks. They are shoe prints, look all around!” I said.

“Yes, I know, they do look like shoe  prints, but when I follow them out to the driveway they are clearly moose prints. Come see.” I walked out to where he pointed the flashlight. They were obviously moose tracks. I retraced them back to the snow where they looked like footprints. In the deeper snow, the moose’s leg or  hooves dragged before they sank in, leaving an impression of the “heel part of a human’s shoe”. We had a good laugh and were quite relieved that the prints were not what we thought!   The footprints in the picture look small but they were actually about the size of a man’s size 11 shoe.

4 responses to “An Early Morning Prowler”