As I have mentioned before, my former married life was excruciatingly painful. I often felt overwhelmed and badly in need of an emotionally supportive friend at home. God sent that supportive friend in the form of a dog. 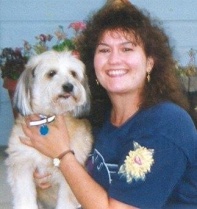 God knew what He was doing when he made dogs. Annie was the best friend a person could want. It was spring of 1986. My three children then were five and under. As an avid animal lover, I jumped at the chance to get a lapdog when I heard there was a litter of designer-puppies. Free! They turned out to be a Lhasa-apso-terrier-mix. The owner did not want to deal with selling the mixed-breed pups. For over a week I begged my then-husband to give a puppy a try until he finally conceded, but was adamant he didn’t want this dog, he wanted a Doberman.

There was only one female left by the time we got the puppy. She was blonde, very affectionate and cuddly, with a curled, shaggy tail.

The kids and I were exhilarated when we brought her home. Months before we knew of the litter, I told the kids someday I wanted a girl dog named Annie. After that, my two year old son told everyone “My doggy name Annie,” so we named this puppy Annie.

As with any pup, potty-training took lots of effort. But with Annie, I had to be even more diligent. Annie developed a fetish of going poop in my then-husband’s shoes. The first time he found poop in his shoes he was so livid I thought he was going to throw her out for good. He wanted her outside only. I worried I would come home someday to no dog.

She was way too small to stay outside, so I promised him it would never happen again. I cleaned his shoes and sprayed them with Lysol any time Annie defiled them. It didn’t help that he always left the closet door open. She never pooped in anyone else’s shoes.

“So little and already a great judge of character!” my friends said when they heard the story.

I gave Annie plenty of potty breaks, but she pooped in his shoes off-and-on for two weeks. I kept the bedroom door closed, but life with three little ones was quite busy. Sometimes, I sent one of the girls to get something for me from the bedroom and Annie snuck in.

I would catch her in the hallway with that guilty, uh-oh look. Immediately, I’d take her little nose and make her smell the poo, tell her “No, bad girl!” swat her little bottom once and take her outside.

“You can’t keep doing this. Don’t you know we will have to give you away?” I cleaned his shoes, sprayed the inside with Lysol to disinfect them and because Annie hated the smell, and dried them with the hairdryer.

“Why do my shoes smell like Lysol?” my then-husband said, “Annie is not still pooping in my shoes, is she?”

“I sprayed your shoes because Annie hates Lysol.” It was true she hated it, but of course, I was lying by omission and felt guilty about it. Thankfully, she got the message.

He kept trying to find reasons to get rid of her, and threatened to give her away. At times he was mean to her. Fortunately, after a couple of years, she grew on him and he didn’t complain much about her. 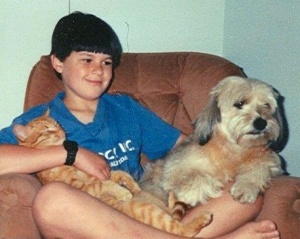 Jonathan, Annie, and Stinky, our cat with a milk intolerance.

Annie was a great playmate for the kids. With three kids, one child usually felt left out. She was always there for them. Annie won my heart long before she grew much bigger than the designer lapdog I dreamed of. She weighed 26 pounds but considered herself a lapdog.

She was such a good girl. Often, I was sure I would explode with grief and sadness over my marital situation and found a quiet place to cry my heart out to the Lord. Annie was always by my side consoling me with her sweet nature. I was amazed at how affectionate she was then, as if she knew I needed her more.

After several years, I realized how incredibly intelligent she was. Sometimes, I sat on the front porch steps to read or talk on the phone, with Annie by my side. Before I knew it, she disappeared. At first I didn’t know how until I watched her closely. She waited till I was deep into the book or conversation, then she slowly walked around sniffing the grass. Once she was halfway around the other side of the minivan on the driveway, I saw her legs speed up. She took off at top speed down the street to sniff out the neighborhood.

She pretended she didn’t hear my calls as she sped down the block. When I jumped into the minivan or ran and caught up with her, she turned around and limped towards me. That was the only time she limped. I often scolded her while suppressing laughter.

My then-husband didn’t allow her on the bed so she slept on the floor by the bed. In the morning when he went to the bathroom or took a shower, she jumped in bed with me. As soon as she heard the shower turn off or the toilet flush, she would jump down and lay in her usual spot.

One year our next-door neighbor watched her while when we went on vacation.

“Annie is a very good dog, but she is a trickster.” I said before we left. My neighbor gave me an odd look. “Annie will try to fool you, she lies.”

“She sneaks off. When you catch her, she pretends she is injured and limps back home for sympathy.”

She lifted an eyebrow. “Oh, she can’t be that smart!”

We returned and stopped off to thank our neighbor. “I wouldn’t have believed it if I hadn’t seen it myself. She did just as you said. She snuck off down the street. When I caught her she limped all the way back home. What a smart dog!”

God was very kind to me when I needed a true-blue, bosom-buddy. Of course, God is always by our side through thick and thin, but he gave me a very loving dog as my earthly comfort. Whether I was happy, sad, angry, cheerful, frustrated or grumpy, she was by my side at home. She is included in a professional portrait of the kids. When she was 15 1/2 years old, I had to put her to sleep. I held her till she took her last breath and slid into eternal sleep. She will always be remembered as a wonderful family member.

Psalm 116:1-2 God hears my cry. “I love the Lord because He hears my voice and prayer for mercy. I will pray as long as I have breath.”

Filed under Animals, Awed by His Love and Grace, Gottalaugh, Hope, In a Kids World, Inner Sruggles and Heartache, Just for Fun, Seeds of Inspirations, Writing and Author Stuff