Well, seeing how Christmas is a mixture of pagan and Christian traditions, I don’t believe God has a Christmas tree decorated with lights and cherubs.

I don’t believe He adorns the halls of Heaven with twinkling lights and bows of greenery.

I don’t believe the heavenly host rush around their kitchens making millions of divine delights for their annual cookie exchange.

I don’t believe God has shopping requests, or naughty or nice lists. (Though He does say all the names of those who have been washed in the blood of the Lamb have been written in His Book of Life)

I don’t believe December 25th is highlighted on God’s calendar.

God certainly is not a Santa, swooping down as earth sleeps, dropping gifts into chimneys.

Maybe the better question is:

Does God celebrates the birth of His Son in Heaven?

God was so adamant with the Hebrews about celebrating special holy days, days commemorating colossal miracles and events, that He required them to celebrate them.

Passover:  The Jewish people are saved by the marking of the blood of the scarified lamb on their doorposts the eve of Passover, before the great Exodus from Egypt, as commanded by God.

Jesus later (in 32 AD) offers Himself as the final sacrificial lamb on the eve of Passover.

The Feast of Unleavened Bread:  Just before the Passover, all yeast (symbolizing sin) was removed from the home for seven days.

Later in 32 AD, Jesus’ sinless body, the bread of Heaven, was buried in time for that feast.

Feast of First Fruits:  On the 17th day of Nisan, the first fruit of barley harvest is celebrated before God honoring his goodness and providence.

On that very day, in 32 AD, Jesus was risen as the first fruit of the dead.

Feast of Pentecost or Shavuot: Celebrated 50 days after the Passover, represents the day the Spirit of God visited and established a betrothal relationship with His people through the Law of Sinai, or The Ten Commandments.

Interestingly, it was during this feast after Jesus’ resurrection that the Holy Spirit individually visited the believers, and the congregation of believers was born.

Feast of Trumpets or Rush Hashanah:  The trumpets or shofar are to be blown on the first day of the Jewish New Year, followed by ten days of repentance.  The trumpets in biblical time represented a shout of warning or of war.  It is believed to represent a future time, the Day of the Lord, the beginning of the tribulation as stated in Daniel’s prophecy of 70 Weeks.

Days of Atonement:  Marks the finality of the ten days of repentance, and is the holiest of the Jewish days; the only day that the high priest was allowed to commune with God by entering into the Holy of Holies. People traditionally spend an entire day fasting and fervently praying. It also represents the future cleansing of Israel and those called by God’s name, Jews and gentiles alike.

Feast of Tabernacle or Sukkot:  Sukkot, which means booths, is a harvest festival and commemoration of the forty-years the children of Israel wandered through the desert living in transitory shelters. The word “Sukkot” refers to the temporary dwellings that they are commanded to live in during this holiday. They live in booths for seven days, and do no work one or two of those days.

If God wanted His people to remember these important days, wouldn’t it seem likely that He want us to also remember such an amazing day as the birth of His Son?

Would God want us to celebrate a day when He comes to earth Himself, in the form of a baby in diapers, destined to grow up to rescue the very people He longs to have relationship with?  The very people He wishes to redeem from the fall caused by Adam and Eve?

God speaks for the first time of a future savior after Adam and Eve break his only rule in paradise.  The coming of this savior covers the span of the Bible, as foretold in Genesis and continues on to Revelation, where Jesus sits at the right hand of God.

Genesis 3:14-15  The Lord speaking to the serpent for deceiving Adam and Eve.

14 So the Lord God said to the serpent, “Because you have done this,

“Cursed are you above all livestock
and all wild animals!
You will crawl on your belly
and you will eat dust
all the days of your life.
15 And I will put enmity
between you and the woman,
and between your offspring and hers;
he will crush your head,
and you will strike his heel.”

I believe there was a great celebration in Heaven as the angels announced Jesus’ birth.

God came to earth as a sinless human being named Jesus, to relate to His people in a way only they could understand.  Jesus taught about God the Father’s love and grace, and His desire to bring life to our spiritually dead souls.  Then He died for them, taking their iniquity on Himself; making right our broken relationship with God.

He rose from the dead and promises to provide a home for us in Heaven.

The New Testament does not mention setting a time aside for the celebration of the birth of the Christ, it concentrates more on God’s love, and His salvation from sin.

But the question remains:

Would Heaven celebrate the day of the Christ’s birth? 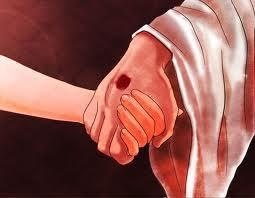 o I’m celebrating the birth of my Savior, the Messiah,  Jesus Christ!

Whether you choose to celebrate December 25th, or any other day; I hope you join in the celebration of Jesus, the Savior of the world!

Filed under Awed by His Love and Grace, Christmas, Hope, Humor, Life and Relationships, The Miraculous

8 responses to “Does God Celebrate Christmas?”