Not all Obesity is Due to Gluttony 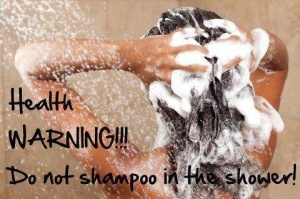 It is so good to finally get a health warning that is useful!

I don’t know why I didn’t figure this out sooner!

I use shampoo in the shower!

When I awash my hair, the shampoo runs down my whole body.

Printed right on the shampoo bottle label is this warning.

“FOR EXTRA BODY AND VOLUME.”

No wonder I have been gaining weight!

Well, YOU BET I got rid of that shampoo!*

I will start showering with Dawn Dishwashing Soap.

“DISSOLVES FAT THAT IS OTHERWISE DIFFICULT TO REMOVE.”

I was so happy to find a solution to my problem!

Oh, if only it was so simple!  Unfortunately, weight gain is not anything to laugh about.

Yesterday I had one of those blinding headaches.  You know the kind: shut the curtains, and leave me alone.  All I wanted to hear was the soothing, humming sound of a fan.  I felt  mentally drained from the pain, and asked the Lord for a post prompt.  After a while, I turned on my favorite Christian radio station. I listened to a segment by a very popular pastor about desires and sensuality that become our idols, and lead us to bad places.

He spoke about addictions like:  the internet, drugs, pornography, and all addiction related.  He spoke of our obsession with pleasing ourselves.  Then he made a very disturbing statement.  It went something like this,

“Did it ever occur to you that your obesity could make it difficult for your husband to be attracted to you?”

I felt anger rise up my spine.  I thought of the overweight women in his congregation now having yet one more reason to feel embarrassed and condemned. Then, I thought of some of their husbands who may be thinking,

“Yeah, he’s right.”  Maybe even some would feel justified in adultery.  Whatever happened to:

Let’s uplift one another?

I assumed there were people in his congregation that needed to hear his message, but to have singled out obese women like that was just wrong in my opinion.

His value went down in my respect meter.  This comment especially resonated with me because just a week before I heard a caller on another radio talk show make another disturbing statement.  It went something like this,

“Well I don’t understand why all the obese people out there get off Scott-free, yet I get judged as a Christian for smoking my cigarettes.  Obese people succumb to all of their guilty pleasures and gluttony; food has somehow become acceptable, while the pleasures I get from cigarettes has not.  Obesity is just as bad for a person’s health as smoking.”

I understand that this was only the caller’s perspective, but this person was justifying smoking cigarettes by judging people who are overweight.  As a Christ follower, I don’t believe Jesus loves this man any less because he smokes. It was the automatic judgment that bothered me.  It hit too close to home for me.

Not everyone with a weight problem is a full-on glutton. Not everybody who is overweight or obese is eating a dozen donuts, or has secret drawers stuffed with candy bars and potato chip bags.  Sure, there are people with weight issues who have lived life satisfying every food craving, but not everybody.

Since childhood, I have struggled with my weight.  My mom thought chubby toddlers were adorable.  She told me she overfed me to make me chubby when I was a baby. My mother also permed, and then lightened my hair with peroxide while I was a toddler.  In my childhood home, looks were valued above anything else, including character.

I struggled with my weight in my teens, then went on Dr. Atkins’ diet when I was fifteen. I lost a considerable

Picture of me when I thought I was really fat.

amount of weight.  Even then, I thought I was fat.  I became so obsessed with my weight; I lived most of my life on a low carb diet.

“I am allergic to carbs,” I would tell people. In essence, I was

I picked out and ate the chips out of chocolate chip cookies and threw the cookie away.  I mainly ate the frosting from any doughnuts, or piece of cake I ate, which was rare that I ate any.  I was horrified the day my third child was born. I stepped on the scale and saw the unthinkable.  I still had twenty-five pounds to lose.  The hospital staff said it would come off which it eventually did, but only because I fought every single pound off.  I can probably count on both hands how many times in the past twenty years more than a tablespoon of spaghetti, or other kind of noodles has crossed my lips.

The last two years have been horribly stressful mainly because of my son’s death, September 2011, and other tragic things that came along immediately after.  Everything in my life seemed to fall apart.  The only thing that seemed constant was the weight gain reflected on the scale, and my tight clothing, that reached a total of thirty pounds.

The stress began to really show in the way my body processed food.  After blood tests, my doctor suggested a total system cleanse.  My liver and kidneys were over-taxed by the stress, and all that stress caused stored belly fat due to cortisol.

When we are under severe stress, our bodies produce that flight or fight hormone called cortisol to help us escape or cope with the urgent problem at hand.  Read more here.

Unfortunately, or bodies cannot tell the difference between our stressors.  Whether it’s the loss of a job, a divorce, a fall down the stairs, dealing with a difficult teenager, the flu, the death of a loved one, cancer, heartache, problems at home or at work, stress is stress for our bodies, and too much stress can severely affect a person.  Many people get that spare tire around their tummies as a result of too much cortisol.

My doctor suggested I go without any kind of bread products, eggs, cheese, grain, and milk. I only ate chicken and vegetables for months to help my body and organs regroup.  Yet my body refused to shed any weight.

As I lay in bed, unable to sleep at night due to stress; I imagined curds of cortisol depositing themselves one by one all over my abdomen.

My husband and I went on an Oregon coast vacation a few weeks ago.  While there, I decided I was going off my organic chicken and vegetable diet.  My husband agreed to make the great sacrifice and do the same, though he has no weight problem.  True to male metabolism, when I diet, he loses more weight than I do.

Thanks a lot, Eve!

For a week we ate like teenagers (I am not in any way recommending this).  I ate plenty of the forbidden bread and dairy.  We had the best ever chocolate cream pie twice that week. The slices were oversized, more like a double portion serving plus.  We ate only two full meals a day, but we broke the rules and ate: onion rings, crab cakes, hamburgers, chocolate shakes, ice cream, fried calamari, three-egg-omelets, pancakes, and anything else that suited our fancy.  Our exercise had not increased much that week.

I have to confess, I am one of those people who for decades have weighed myself every day, so I take a scale on trips.  Daily, I weighed myself in Oregon.

“Something must be wrong with this scale,” I told my husband, “because it is not going up after all that I have eaten!”

Hmmm, that’s odd, I thought.  Maybe I am sicker than I thought, and the way I have been eating further harmed my liver and kidneys.  Maybe I’m dying.

I had a prescheduled doctor’s appointment two days after we got home.

“I must be terribly sick,” I told her.  “That’s why I could eat all that food and not gain any weight.”

“No, you are just fine,” she said.  “In fact, your health is improving.”  She was amused at my alarm over my extreme gluttony with no weight gain.  “I think you just have not been eating enough, which throws your metabolism into a survival mode. Your metabolism needed a nudge.  Your binge nudged it enough to get your body’s metabolism to readjust.  I don’t recommend these binges, but in your case it was a good thing.

“Imagine that,” I thought.  “I gained weight rather than lost because I wasn’t eating enough!”

To those who believe every overweight person is a sweets and starch binging glutton, please know that is not true. Try not to judge. I have known people very committed to their healthy diets, but cannot lose weight because of hormonal issues, or because of overwhelming stress.

The Lord reminded me that I have also been guilty of the same judgment.

I believe this is worth repeating.  Galatians 6:2  Bear one another’s burdens, and so fulfill the law of Christ.

Filed under Everydayliving, Hope, Inner Sruggles and Heartache, Loss of a Child, Seeds of Inspirations

6 responses to “Not all Obesity is Due to Gluttony”